Got the Parallax continuous rotation servo to work perfectly today morning! I think this is the easiest type of motor control you can ever have - simply send pulses with different ON times and the servo rotates in both directions at different speeds!

Work to be done: get the sonar working - clean up the kernel code and write a proper driver - try to compile Python for the AVR32 and run it from an SD card - experiment with Lua - assemble the robot!

Software Freedom Day is being celebrated in Trichur on Sep 14 and 15th. The venue is the `Chamber of Commerce' hall, Palace road. This year's celebrations will highlight the efforts of a dedicated group to bring Malayalam language computing to GNU/Linux.

Local newspapers and magazines are beginning to take a strong interest in GNU/Linux and Free Software. Don't be surprised if you see the venerable old `GNU' smiling at you when you open your newspaper:

It's high time that more people come to know of the Windows Genuine Disadvantage and opt for the wonderful world of freedom! Engaging people from different walks of life (other than computing) is essential if GNU/Linux is to fulfill its true potential - that's what the SFD celebrations in Trichur will attempt to do.

This is off-topic, but I think I should mention it. There ARE a lot of people who can never be motivated. Whatever you do, they simply won't change a bit. Sort of like the Malayalam saying in which a kid tells his uncle: `don't beat me uncle, I will not change'. I have been having a lot of frustration dealing with whole batch full of such students. But there seems to be a ray of hope. The current batch of 3rd sem students seem to be different. I had mentioned something about the `Obfuscated C code contest' in class yesterday and I see one fellow coming up with such a program today! I had asked them to read K&P and I see a few of them actually reading it and even coming and asking doubts! I mention something about `path' in class and I hear one or two guys shouting about `environment variables'. And, wonder of wonders, I see *boys* getting up and coming to class at 6:45 AM so that they can do something before I start my `regular' class at 7:15! Don't know how long this will last ... but I have hopes ...

Tested the PWM unit - had it been something like the Atmega without the burden of an OS on top of it, things would have been over in 10 minutes. But since I wanted to do things the `proper' way (stick with the interfaces which the kernel provides), it took some time to get all the bits and pieces together.

The PWM outputs (4 channels) will be used to drive the servos controlling the robot. Now I need to get a timer/counter unit active so that I can measure the width of pulses returned by the ultrasonic ranging module.

Here is more about programming the PIO controller. As usual, you will have to reload the page once or twice to get things rendered correctly.

Things are going to become more interesting ... I have some really cool stuff from Parallax which I am going to hook onto my ATNGW100. 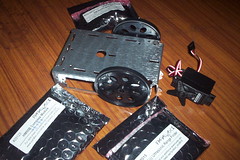 Written on the cover of the iPod which Gopu got for me from the US was this statement:

Apple is being very considerate - they are calling us `thieves' and not `pirates'!

I had no second thoughts in getting rid of the Apple firmware and instead loading Rockbox, a very capable GPL'd replacement firmware which lets you play lots of audio formats (including Vorbis). The UI doesn't look pretty - but it does the job - my wife is using it without any problems.

MS India chairman Ravi Venkatesan has great words of wisdom for us.

Being a world leader, in a sense, in the software sector, can’t Microsoft make piracy-proof products?

Every time somebody invents a better mouse-trap, criminals figure out how to break that.

It's interesting to see how easily the common man has been fooled into believing that he becomes a criminal (that too, a pirate) when he `copies' something. It's not easy to convince people this is not the case - such is the power of the `psychological conditioning' carried out by software/media companies for the past many years.

Mr.Chairman goes on to say:

In Windows Vista, one of the things we are doing is: if you can’t show that you are using genuine [software] and you don’t go and get a genuine version, you will operate in ‘Reduced Functionality Mode’ — a very, very diminished state.

Industry insiders say that MS has tied up with Intel/AMD to implement a special assembly instruction called:

which when executed on a Pentium/Athlon/Sempron processor will result in the processor destroying itself by consuming a large amount of current. The next version of Vista, code named Vista++, will invoke the BLING (BLow up If Not Genuine) instruction if it finds out that you are not using a genuine version.

The mechanical dimensions of the ATNGW100 are given here. There are 3 expansion headers available - J5,J6 and J7. The pinout details are given here. I want to gain access to the PWM channels - so I decided to go with J5. An old hard disk cable came handy. 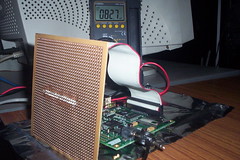 A few neat configfs tricks later, we are ready to blink LED's!

By the way, is it the end of the road for ioctl's?

Things to do immediately: read the gpio driver, write a PWM driver.

Ready to hack the kernel...

That's what Kishore has to say.

If I were to write something about this topic, I will go totally out of control, so I won't attempt it.

I still remember furiously attacking the author of a Hindi story by scribbling along the length and breadth of my textbook - I don't remember why - maybe because I found the story stupid and was angry at my teacher who made me learn the thing by-heart. What we see in B.Tech is just a continuation of the same `methodology'.

My advice to Kishore would be this - it's not easy for us to fight the system - as they say, `when you are in Rome, do as the Romans do'. So do whatever is necessary to get good marks. In the meantime, develop interest in some subject and pursue that with passion; that will compensate for all those hours of boredom!