Got the Parallax continuous rotation servo to work perfectly today morning! I think this is the easiest type of motor control you can ever have - simply send pulses with different ON times and the servo rotates in both directions at different speeds!

Work to be done: get the sonar working - clean up the kernel code and write a proper driver - try to compile Python for the AVR32 and run it from an SD card - experiment with Lua - assemble the robot!

Software Freedom Day celebrations in Thrissur began with a meeting of Free Software Enthusiasts at the Chamber of Commerce. Before I write more about today's events, let me share with you a great document written by Dr.Sasi Kumar:

Story of Free Software in Kerala

To add a bit more history to Dr.Sasi Kumar's story - Prof. Jyothi John was instrumental in creating perhaps the first group of GNU/Linux enthusiasts in an engineering college in Kerala when he gave us (1992 - 96 batch of CS students, Model Engg College) a bunch of floppies containing this `new' OS! A small bookshop under the north overbridge in Ernakulam, `Mindstorm' gave us our first GNU/Linux books (basically a compilation of some HOWTO's) long before bookshops in India started stocking `Linux' books! A bookshop in Trichur, Cosmo books, started using a small network of GNU/Linux machines (with some s/w written by I believe the River Valley people) when the techies in Bangalore were still cleaning viruses from their Windows PC's! (And, a young commerce graduate working in this bookshop - an absolute computer illiterate - was merrily configuring NFS and setting up GNU/Linux networks when `Software Engineers' were still using M$-Windows because it was more `user-friendly')

Here is yet another great news:

In the largest such simultaneous deployment of ‘free-and-open’ software in India, over 15 lakh Kerala schoolchildren on Friday start taking their quarterly practical tests in Information Technology on personal computers using a special Linux version.

Coming back to todays events, the meeting was held at the `chamber of commerce', Palace road. Besides the usual gang, there were a few distinguished personalities from the field of language studies and journalism. 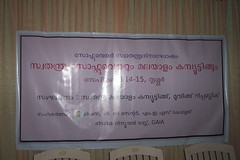 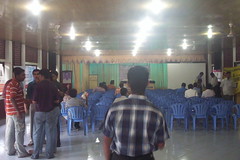 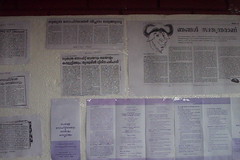 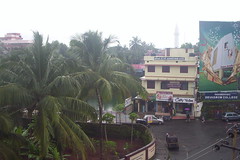 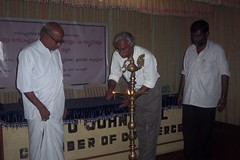 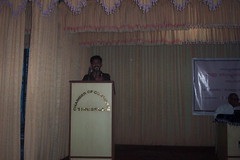 One of the objectives of the meeting was to take stock of the activities going on as part of the `Swathanthra Malayalam Computing' effort for the past one year. SMC was started by Baiju M when he was a student at REC Calicut. The project was dormant for a long time until it was woken up by Praveen and friends. A major push came in the form of the project being selected for the Google Summer of Code (I believe it is the only Indian project participating in SoC). A total of seven or eight projects coming under the SMC umbrella had their formal `release' today.

The Malayalam Unicode font, designed by Hussain and Suresh, was released at the function. 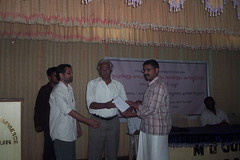 Santhosh Thottingal released a spell-checker (based on GNU Aspell) for Malayalam. Santhosh is also behind several other interesting language projects including adding Malayalam support for the text-to-speech engine `Dhwani'. He spoke about some of the challenges involved in designing the spell checker, one of which was the creation of a sufficiently large list of `correct' words. 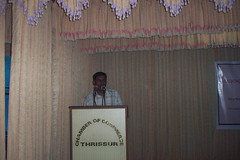 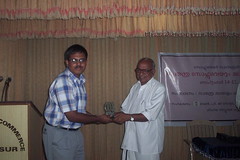 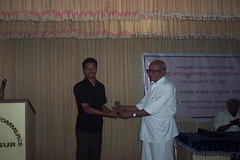 There are people who doubt the logic behind creating a computing environment with support for a language like Malayalam. After all, almost all of us can read and understand basic English, so what's the point in putting in so much of effort? The answer is to look from a much wider angle. As one of the speakers pointed out, a language has to continuously evolve if it is to be alive. A language like Sanskrit is virtually dead - few people use it. A society and a culture is identified by its language - once the language is dead, the society starts losing its identity. A good way to keep a language alive is to take it to the digital world - the world of the PC/Communication devices and the Internet. This is one context in which developing regional language computing environments and popularising them has great significance.

I was able to attend only the morning session today (Sep 15). But it was very interesting. There was a demonstration of all the packages developed by SMC. Anivar gave a historical sketch of the Malayalam computing effort. Praveen and Hussain sir gave a tutorial introduction to Unicode and the issues behind introducing Malayalam language support. Vimal was distributing GPLv3 buttons to everybody - I couldn't get one because I came to know of it only later :-(. Shyam showed me his Malayalam speech recognition program - the noise in the hall was making it difficult for the tool to work properly. I listened to Santhosh's TTS system reading out Malayalam text in a `robotic' manner. Then there was Sarath Lakshman hacking up a Python program improptu so that he could gather the address/mail id/phone number of all the meeting particpants! Mahesh and Kishore were also there. A good number of S3 CS students were running around enthusiastically ... these guys/girls are our hope!